Chilli is total comfort food and one that you don't need to go without, even though we don't eat beans. This version has a Mexican Texas background, and I've been told that they never use beans there in their chilli, so it's perfect for Paleo.

Texans consider their chilli recipe to be one of their staples and I think we should as well. Since it's still cold in many parts of the world, I think it's a meal that could really hit the spot right now .... and it smells amazing while it's cooking. 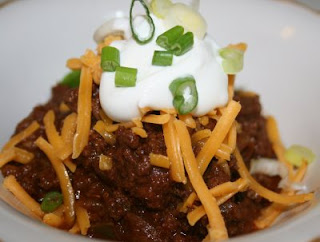 This version comes out very dark and rich looking, and once cooked the meat is very tender and shreds easily with a fork.

Serve it with  any or all of the following :  avocado slices, chopped tomato, chopped green onion, chopped cilantro, sour cream, grated cheddar cheese and lime wedges. 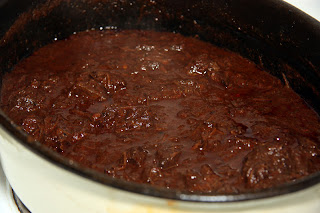 - To a large heavy skillet, add a couple of tablespoons of fat (olive oil, coconut oil) and then the beef.  Cook on high heat until all the meat is browned on all sides, then remove and put into the slow cooker.
-  Put the onions and red pepper into the skillet, adding more fat if needed, and brown these.  When they are softened, add to the beef in the slow cooker .
-  Now just add in all the rest of the ingredients except for the vinegar, mix well, and cook on low for 8 to 10 hours.
- Once the chilli has finished cooking, mix in the vinegar. 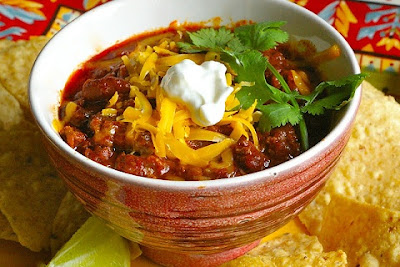 A couple of points :

I know there seem to be a lot of ingredients here, but don't let that deter you.  Once you've browned the beef and vegetables you just throw everything else into the pot so it's actually a very easy to make recipe.

Also, I'm sure you immediately noticed the beer.  Beer makes it un-Primal, but it does give it a lot of flavour.  The alcohol cooks out of it and all that is left is a very delicious flavour.  Considering it's one beef split by six servings and you don't eat chilli every day, I think you can probably justify this as part of the 80/20 rule, but that's up to you.  It will work with just using water, though won't be quite as flavourful.

And another non-Primal addition you might want to make are a few plain corn naco chips.  Rob Wolf is constantly talking about going out for a night of nacos so obviously it's an exception even the great and mighty do make occasionally.  I have this as a splurge meal once a month and find it works for me, but some people totally can't have any corn so again it depends on your situation.

If you're not a Texan it might seem like a strange combination of ingredients, and I had my doubts when I first made it as well, but I was pleasantly surprised at how they all seem to work together.  You will need to play around with the amounts as everyone has their own preferences, so if the first version you make isn't quite the way you like it, don't give up.  I think it's worth the trouble to play around with this a bit. I've changed my version from the original and I think it was well worth it because now it's a definite staple for me.

This is one of those recipes that becomes more and more amazing with age, so if you can stand to wait until the next day to heat it up and eat it you won't regret it.  And of course it's one of the best freezer meals to make, so it's a good thing this recipe makes a large quantity. 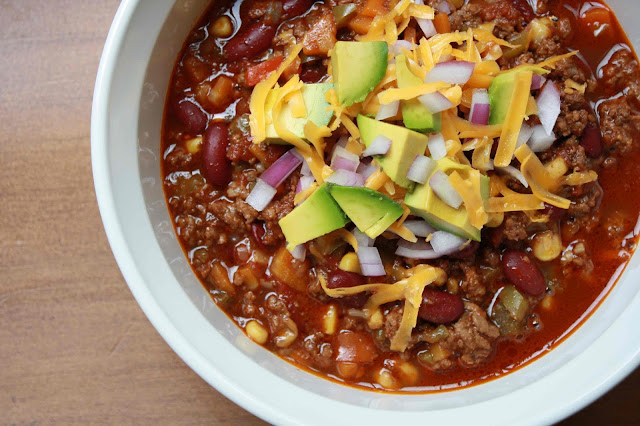