This is an incredibly easy recipe as long as you follow a couple of easy rules.

Some people wrap the bacon around the chicken, but I find if you do that the parts that are under the chicken get soggy instead of crispy. Also, if you don't remove the bacon as soon as it's done, it will be hard and probably burnt by the time the chicken is ready. 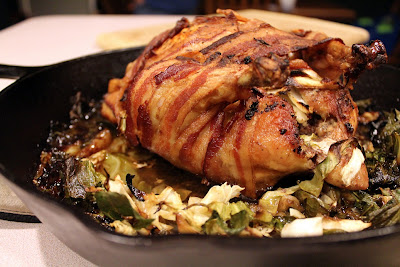 At http://paleoparents.com (these are their photos) they serve their chicken with cabbage which they put into the pan under the bacon. Yum!

Follow the recipe for lemon chicken lemon chicken recipe, but before putting the chicken into the oven, place the bacon on the top to cover. If you have bacon left over, put it into the pan next to the chicken.
- Bake as for lemon chicken, but watch the bacon. When it's cooked, remove the pan from the oven.
- Remove the cooked bacon onto a plate, then put the pan back into the oven and cook for the rest of the recommended time until the chicken is done. Because it's now covered in bacon fat, the skin should be lovely, crispy and browned.
- Remove the chicken and serve with a couple of slices of the cooked bacon on top of each piece

(will freeze) Freeze leftovers in individual portions with some bacon, or use for lunches. It's just as good cold. 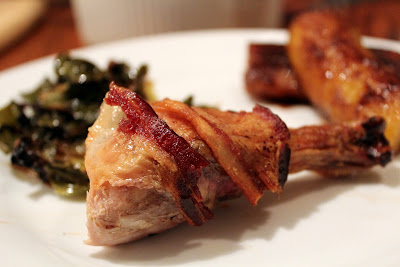