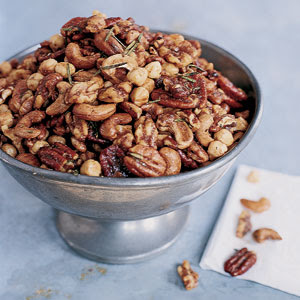 Reading through the posts on marksdailyapple.com regarding eating nuts, his general consensus seems to be that we need to be careful not to overdo them.  Not because they aren't healthy, but purely because they are just too easily available to us and therefore it's just too easy to eat them in larger amounts that what we really need.

This is why I am putting this recipe under sensible indulgences.  It's a recipe from a TV program I was half listening to.  This particular program included a lot of celebrity chefs giving their favourite places to eat and recipes from these places, and this nut snack from some bar somewhere was mentioned.

It only really caught my attention because the mix of ingredients was so unusual - sweet and salty and spicy all at the same time with herbs thrown in as well.  It seemed like an unlikely mixture to me, but this person was raving about how good they were and since I was having company over that evening I decided it would be something novel to try and serve.

It has now ended up being my most popular nibble to serve to guests.  Bowls of this seem to disapear very quickly and it's hard to keep up with the demand, so the woman who raved about these on TV is obviously not the only one who thinks they are terrific. 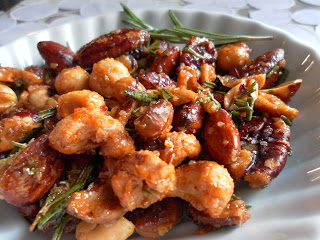 However before I give you the recipe it does pay to mention yet again that is is a Sensible Indulgence.  Something to be enjoyed once in a while in small quantities. And it's probably also worth mentioning yet again that if you are using a ready made nut mixture, don't use one containing peanuts as peanuts are not a nut but a legume and not recommended. Not to mention that many people seem to be allergic to them as well, and having to deal with a potentially fatal allergic reaction won't really do a lot to make your party a success.

Also, I'm going to give you some approximate amounts that I use, but I'm letting you know right now that you will probably need to adjust them. This is for several reasons.  One, because I don't remember what the exact amounts were in the original recipe to be honest, and two because I think a lot depends on personal taste.  I like a lot of paprika in my mix.  You may not. You'll just need to play around with this one. 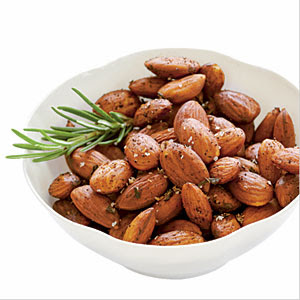 -  Pre heat oven to 425'F.
-  In a large bowl mix the nuts with the butter, salt, paprika and maple syrup.  Chop up 2 or 3 sprigs of the fresh rosemary and mix that in as well.
-  Spread the nuts out onto a cookie sheet and roast for 15 to 20 minutes.  When you can start to smell them, check to make sure they are not starting to burn.  Timing can vary depending on the size of the nuts.

The woman on TV who raved about these said they were served warm, however I notice my guests had no problem devouring them even once they got cold. I have also made this recipe with just one kind of nut when that was all I had with equal success. 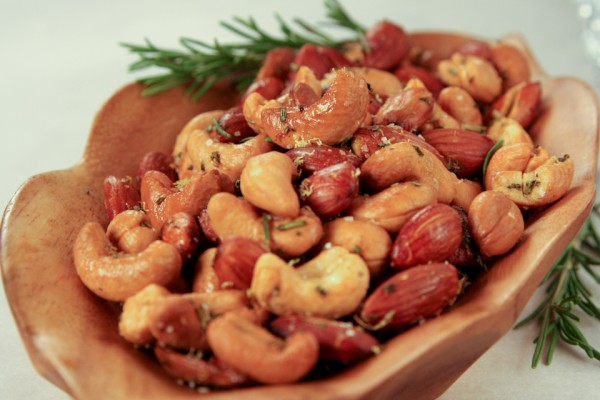