Cooking with Broccoli and Peppers 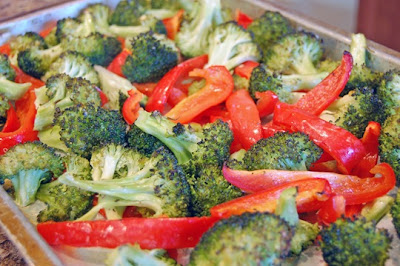 Now that I've talked about how good broccoli and peppers are for you and how to grow them, here are a few more ways to use them.

This first recipe is from eatathomecooks.com and makes use of both broccoli and peppers to create a simple but colourful side dish for any dinner.  As the instructions say, this really is more of a method than a recipe.

There are no specific amounts given because you just use whatever amount you want for your family and in whatever ratio you choose.

Toss the broccoli and red pepper slices with a little olive oil so all the vegetables are well coated with the oil.  You can do this in a large bowl or in a large plastic bag.

Pour your coated vegetables onto a rimmed cookie sheet, season with salt and pepper to taste, and then roast at 400 'F for about 15 to 20 minutes. 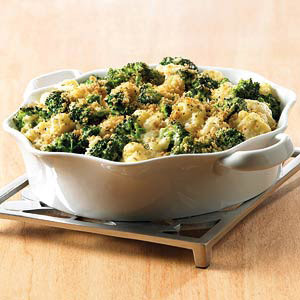 This second recipe makes use of two vegetables that a lot of people avoid, but cooked together like this there are few who can resist them.

Again, this recipe doesn't really have any set amounts given and you can make a lot of variations.

Start with making a simple cheese sauce.  Set your oven to 375"F.  Cut up as much broccoli and cauliflower as you need for your family in whatever combination you wish.  I usually use half and half, but if your family doesn't particularly like one of these vegetables, just use a third to two thirds.

Put the cut vegetables into a buttered casserole dish.  Cover with cheese sauce.  Add salt and pepper to taste, and finish with some grated Parmesan. (This is what gives you that crunchy topping)

A variation that I particularly like is to add some curry powder or chutney to the cheese sauce before using (You only need a teaspoon of chutney or curry powder - just to add a little flavour)  and then to top with some slivered almonds along with the grated parmesan.   You could also make some bread crumbs by drying Paleo bread and use those mixed half and half with the parmesan. 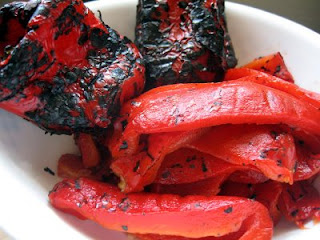 This recipe is a favourite of mine.  I discovered this decades ago - the recipe source has long since been lost - and have made it every summer when peppers are abundant.  It takes a little bit more work than most of my other recipes, but you can make a lot of this at once and then refrigerate or freeze it for later eating.  This recipe makes a lot so you will have enough to make pizzas all summer long.

How to roast red peppers

There are various ways you can do this.  My favourite is just to cook them on the barbecue until they are a bit black, then cool and peel.  You can also roast them in the oven or cook them in a pan over heat.

The easiest way to peel your roasted peppers is to let them cool completely in a plastic bag.  Then you can just rub off the skins.  Here is a video that shows you how it's done.

This recipe will make enough for 16 - 12 inch individual pizzas

-  Soak the raisins in hot water to cover while preparing the peppers.
-  Cook the peppers, cool, and remove the skins.  Cut into thin strips. Place into a large bowl.
-  Drain the raisins and add to the peppers.
-  Mix in the oil, vinegar and garlic and season with salt.
-  Leave to marinate at least 30 minutes before using.

The peppers can be refrigerated for up to 3 days.  After that you can freeze them.  Bring them to room temperature before using.

-  Preheat oven to 425'F
-  Brush the pizza base with a little olive oil.
-  Scatter the peppers and the tomatoes over the dough.  Add the goat's cheese in 1 teaspoon mounds. Scatter the olives and parsley over the pizza, and finish with a drizzle of oil.
-  Bake for 10 to 12 minutes or until cheese is bubbly.

You can also use sun-dried tomatoes instead of fresh for an even more intense flavour experience. 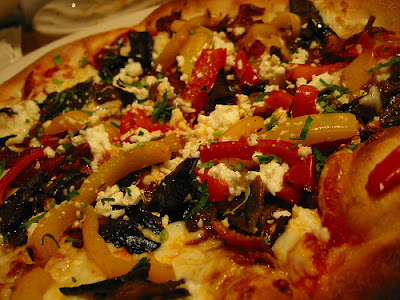 Lastly, here is a great way to eat more broccoli and cauliflower.  I first saw this recipe in one of Suzanne Somer's books, and have since seen it on several blogs, but it's so simple and so good it's worth repeating here.  I often make up a big bowl of this and eat it with my lunch salad for several days in a row.  It's also a great vegetable option to have in the fridge for those too-hot-to-cook summer days. 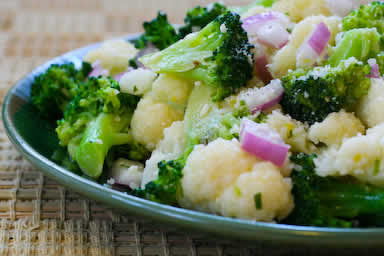 Broccoli and Cauliflower with Vinairette

-  Chop and steam the broccoli and cauliflower together in a large pot until just tender but still crisp. Do NOT over cook.
- While the vegetables are steaming make the vinaigrette.  Put the lemon juice, garlic, salt and pepper into a blender, then slowly add the olive oil, pulsing until the oil is emulsified.
-  When the broccoli and cauliflower are cooked toss immediately with the vinaigrette.
-  Either eat immediately, or cool and refrigerate to eat as a cold salad.

You can top with some chopped red onion for colour and extra flavour as they have done at www.kalynskitchen.com where you can also find another version of this recipe. 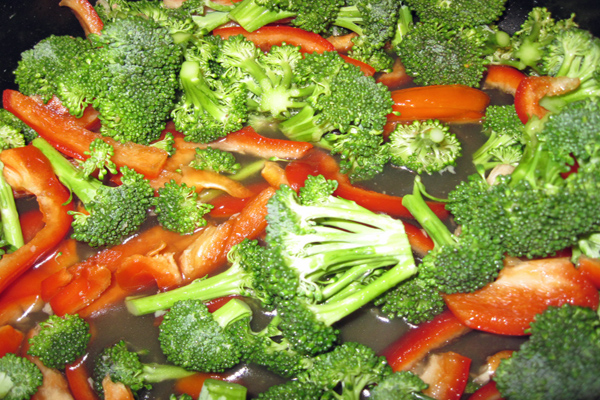