Are Paleo and the Mediterranean Diet all that different ? 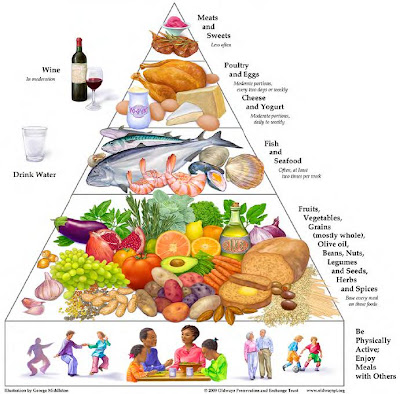 Can you eat Paleo and still follow the Mediterranean Diet ?  Yes, I believe you can, and possibly this is a healthier way to follow it than the meat-heavy menus that most associate with Paleo.

I have always loved Italian food, and until I found Paleo, I thought it was the best way to eat.  Because Italians have always made pasta a major part of their diet, I figured I would have to completely change my eating plan, but now I'm beginning to think I was premature in my thinking.

Maybe the Mediterranean way of eating was the healthiest way to eat up until a few decades ago. 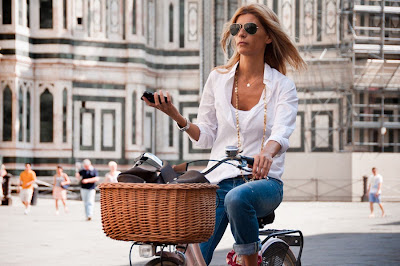 Maybe now that our grains are no longer edible ( as per Wheat belly ) all we need to do is make a few adjustments, then this system of eating that's kept Italians healthy for centuries can work for us again.

Let's look at this beautifully rendered Mediterranean pyramid I found online (Top of post). When you go through it step by step, you find that most of what is on there fits in with the Paleo way of eating.

The first solid bottom step encourages us to be physically active and to enjoy the companionship of others.  I don't think anyone will argue with that.

The next step - which is obviously the basis of the whole plan -  does include things that Paleo eaters don't want to include in their diet.  But if you really look at it, the vast majority of the foods included are vegetables, fruits, nuts and seeds, herbs and spices and olive oil.  There is nothing in that list that goes against Paleo rules.  In fact healthy Paleo eating encourages a large consumption of these foods as well.

As for the grains, pasta and rice - we have Paleo substitutes that work very well for these, so if you think of the bread as being Paleo Bread and the Pasta Paleo Pasta, then you can have these in your diet as well.

Even though people think the Mediterranean diet is full of grains, there are a lot of people who follow this plan and concentrate mainly on the fruits and vegetables - which makes it very Paleo compatible.

I think the next few steps are very interesting as well.  Instead of pushing tons of meat, the Mediterranean diet promotes seafood as the main protein source.  This is something that certainly has a lot of arguments in it's favour.  Seafood contains a lot of nutrients but few calories - something that anyone looking to get or stay fit should appreciate. (See my post here for more info. on seafood benefits.)

Dairy and poultry are next in line which again fits with Primal if not Paleo practice.  Dairy is very much still a debatable point in the Paleo community - allowed by some but not others. But even if you believe in including it in your diet, I don't think it would be healthy to make it a major protein source, so it's place further up the pyramid makes a lot of sense.

Interestingly enough, in this pyramid red meat is grouped with sweets as something that should only be eaten occasionally, and I believe that for many people that is probably very true.  Not everyone, since people are different, but certainly there are a lot of people who don't do that well eating a lot of red meat. 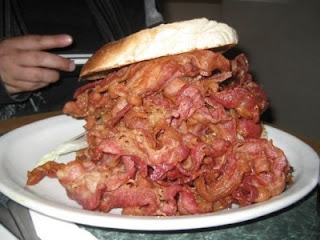 I believe that as a whole North Americans tend to eat way too much red meat, and I don't believe that Paleo should be used as an excuse to eat tons of steaks and bacon.  Moderation might not be a favourite word to use in Paleo circles, but I do believe it nevertheless does have it's place here. Regardless of how healthy it's perceived to be, eating anything to extreme can't be very good for us.

Here we are also encouraged to drink lots of water which I don't think many would argue with, and lastly, wine in moderation is also allowed.  This is something most Primal eaters consider a definite perk.

My conclusion is that when it really comes down to it, the Paleo way of eating is not that different from the Mediterranean way of eating.  They both consider real foods their basis.  They both encourage lots of vegetables and fruits and healthy fats, and they both believe wine is a good thing.  I think we could do a lot worse than to follow this particular pyramid.  As long as we stay away from the big four NoNos - grain, beans & lentils, processed oils and processed sugars - we really can't go wrong eating this way, and we could do a heck of a lot worse. 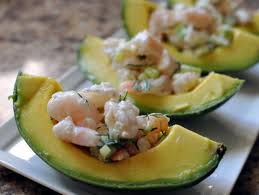 Personally, I don't find eating seafood as my major protein source any kind of depravation.  With things like shrimp & avocado salad, seafood pie, salmon cakes and Cioppino to choose from ..... 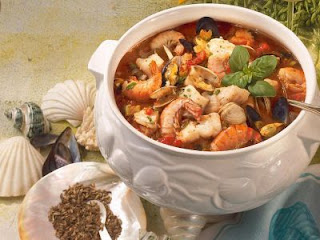 ..... and the extra calories it allows me to indulge in Paleo desserts like lemon bars, apple crumble and chocolate cake with chocolate-dipped strawberries ...... is there really anything to complain about? 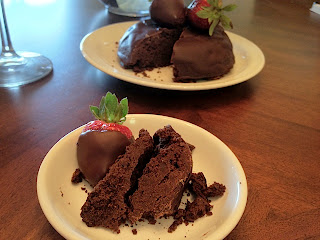 Best of all, now that we have wonderful Paleo pasta as well (curtesy of D.T.Caprio), we truly can have the best of both of these worlds working for us to create both great health and great eating. 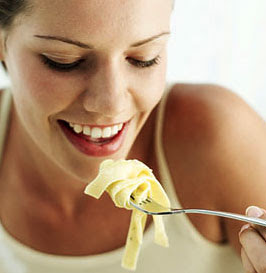