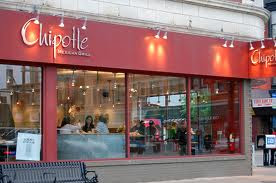 Chipotle's Mexican Grill has become an overnight success and for good reason. Unlike many of the major fast food chains, they make it a priority to use top quality ingredients, and given how full they always seem to be, there are a lot of people for whom this is important.

If you have often wished you could duplicate their chicken or beef at home, here is a recipe that is not the original, but comes pretty close. And the best thing is you can make it easily in the slow cooker.

The flavour comes mainly from the combination of peppers.  These are now more and more widely available, but if your local grocery store doesn't carry them you can buy them in several places online, including Amazon.

This recipe makes enough for 2 batches of slow cooker sauce, so try one with beef and one with chicken.  I haven't tried it with pork, but that would probably work as well. 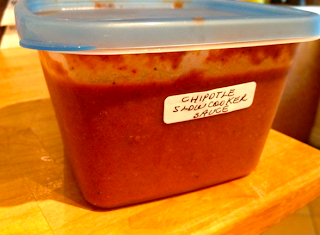 2 oz. of dried ancho chilies
1 - 7 oz can Chipotle Peppers in Adobe Sauce
1 teaspoon black pepper
2 teaspoons ground cumin
2 teaspoons ground oregano (or 2 tablespoons fresh, chopped)
6 large cloves of garlic chopped
1 large red onion, chopped
1/4 cup of olive oil (plus extra for browning beef)
2 cups of chicken or beef broth
5 to 6 lbs. of cubed beef or skinless boneless chicken breasts ( You can use a cheaper cut of beef here and cut it yourself or use stewing beef.) 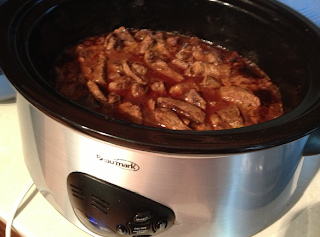 The above directions will give you shredded meat.  If you prefer pieces, chop the meat or chicken and brown it in a little olive oil first before placing into the slow cooker and covering with sauce.  Then cook for 6 hours on high or 8 hours on low and drain the sauce before serving.

This recipe is pretty spicy.  I like it that way, but if you don't, then you need to remove the seeds from the peppers before you blend them.  You can also try using fewer peppers or less sauce.

This is also great used as a marinate for barbecue steak and chicken.  Just place the meat into a ziplock bag with half a cup of marinate, make sure the meat is well coated with the sauce, then leave in the fridge to marinate for at least 2 hours and preferably overnight.  When ready to cook, remove from the bag and grill. This will still give you the same flavour but it will be a lot less intense.

Finally, I have also made this into a quick 30 minute meal by just cutting up the meat, browning it in a little oil, then adding some sauce and mixing until the meat is well coated, then cooking for 5 or 10 minutes, stirring continually, until completely cooked.  The flavour is slightly different, but still very good.

Once cooked the meat or chicken can be frozen in meal-size portions and tastes even better reheated. Serve it in Paleo tacos, on Paleo egg crepe tortillas, or, as they do at healthyninetofiver.com, just over salad greens with guacamole. (This, by the way, is a commonly eaten meal on the Tim Ferriss 4 hour diet.) 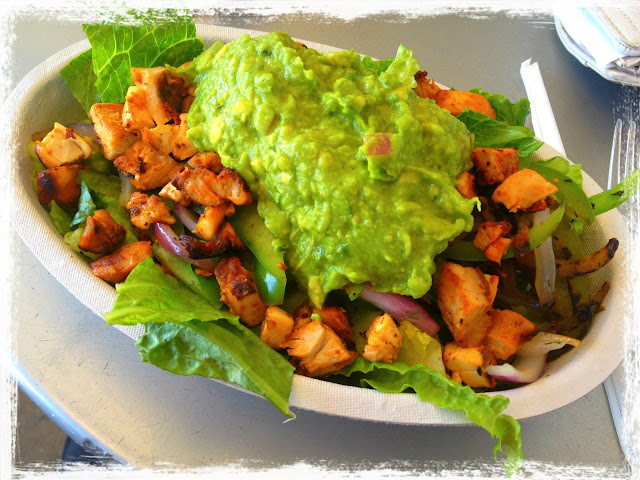