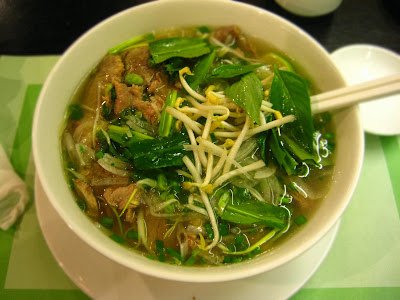 Pho is another of those recipes I had never heard of until I read Perfect Health Diet: Regain Health and Lose Weight by Eating the Way You Were Meant to Eat

by Paul Jaminet, but then I have never eaten any Korean food so that's probably not surprising.  According to Whikipedia ...

listen)) is a Vietnamese noodle soup consisting of broth, linguine-shaped rice noodles, a few herbs, and meat.[2] It is a popular street food in Vietnam[3] and the specialty of a number of restaurant chains around the world. Pho is primarily served with either beef or chicken. The Hanoi and Saigon styles of pho differ by noodle width, sweetness of broth, and choice of herbs. The origin of pho and its name is a subject of scholarly debate.

The version Paul Jaminet gives in his book is very simple - just stock, left-over starch, meat, vegetables, egg yolks, vinegar, and lemon or lime juice all mixed and heated in a microwave.  I am sure this will work as far as basic nutrition goes, but doesn't really have a lot of appeal to me, so I've created my own version.  I have tried to add a few of the more interesting original flavours without creating a list of ingredients that will be difficult to find.

Before you start, you need to make up a jar of pickled onions and peppers.  If you can find some without sugar then you can use those, but since I've found this to be almost impossible, I'll tell you how you can make some yourself quickly and easily. 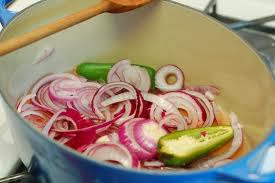 Just slice up some onions and put these into a large pot with a couple of hot peppers cut in half. (Adjust the amount of peppers according to taste.)  Add a cup or two of vinegar - enough to cover the vegetables - and half a cup of sweetener of choice (I use coconut sugar.)

Heat the vegetables just until the vinegar comes to a boil, then cover and let sit until cool.  Pack into a jar or freezer container and store in your fridge at least overnight before using.  As long as you make sure the vegetables are always submerged in the vinegar mixture, these should keep for several weeks, but if you are eating Pho on a regular basis they will be long gone by then.

You can easily vary the ingredients for this soup by changing the protein and vegetables you include.


This is not only a very healthy dish, it's also a great warming lunch for cold fall and winter days.  If you are taking it to work with you, this is perfect for the mini slow cooker.  You can put the uncooked noodles into the stock and they will be ready when you want to eat.  Just pack the toppings on the side and you're ready to go.

HERE'S AN EVEN EASIER VERSION


Even though the version above is really delicious, sometimes you want something really quick and easy.  That's how I felt today, so I made my super-fast super-easy version.

All I did was put a couple of cups of chicken broth into a medium sized pot.  Then I added my 3 scrambled egg yolks and mixed with a spoon until they were cooked. Rice noodles came next and then I brought the soup to a boil.  (Thin rice noodles only need soaking so you can just add them right to the soup.)

(for spice), a handful of spinach, and a handful of cherry tomatoes.  Last I threw in half a dozen peeled raw shrimp and heated the broth until the shrimps turned pink.

Poured into a bowl and there it was - one of the easiest and best lunches I've ever had.  Might not be authentic Pho, but it tasted good to me! 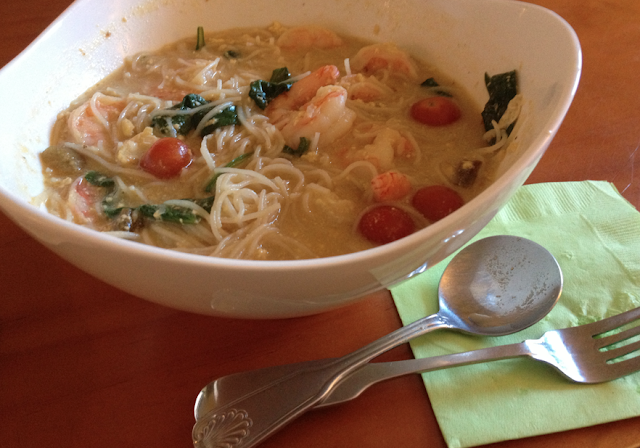