Just a quick update on how my garden is doing.  In one word - Fantastic!

I have a constant supply of basil and parsley and lots of salad greens. As soon as I pick off some of the leaves more grow, so it's really working out well.

I have to say I was a bit leery when I first started this project. These units aren't cheap and the rate of growth they promised was hard to believe, but I have to say I've been very pleasantly surprised.

They had turned out to be everything I wanted and more. 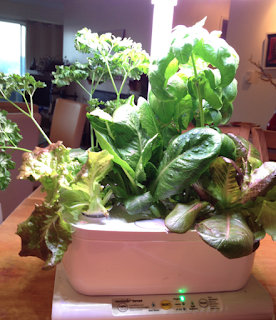 The only thing that's been a disappointment was the cheaper unit I bought.  It might have been cheaper, but when you take into consideration that you have to replace the light every 6 months you're not saving any money.

It also doesn't work anywhere as well as the others.  The light is lower so you can't grow taller plants, and on top of that it's really noisy.  I finally stopped using it because I found it really annoying. Things like that are a learning experience and just show that yes, you do get what you pay for.

Other than that I'm really happy with the whole set up.  And the topper?  My tomato which I only started early January is now already flowering!  The jalapeno pepper plant looks very healthy too so I'm really looking forward to seeing flowers on that as well.

I am definitely going to keep this setup going even in the summer months.  It's the easiest form of gardening I've found yet! 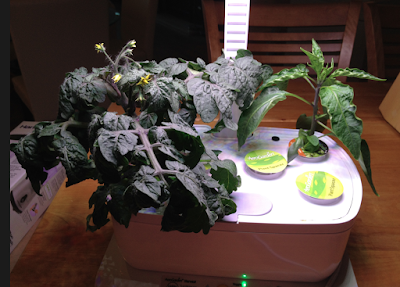